Informa Australia and the ARA are excited for the upcoming industry event, Light Rail 2018, to be held on the 1st – 2nd March 2018 at the Sofitel Wentworth, Sydney. This year’s conference will focus on light rail as a driver of change for urban renewal and development under the theme: Light Rail Transforming Our Cities. 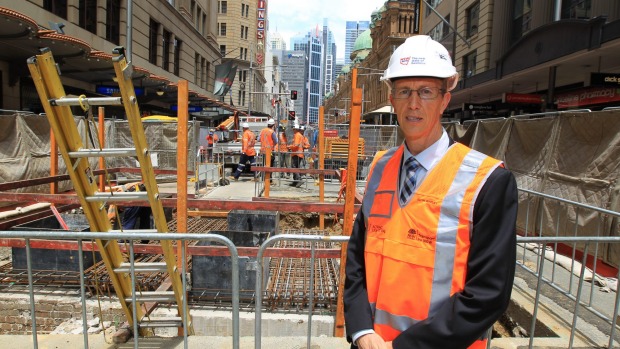 Speaking at Light Rail 2018 is the Chief Executive Officer of ALTRAC, Glenn Bentley. We were delighted to have the opportunity to have a chat with Glenn about his insights into the CBD and South East Light Rail project in the lead up to the conference.

What have been the biggest challenges in delivering the CBD and South East Light Rail project?

Glenn: From the outset, the project presented the inherent challenge of constructing light rail through Sydney’s busy main street in the CBD, and through the densely populated suburban areas of Surry Hills and into Randwick, Kensington and Kingsford.

Minimising disruption for residents and businesses during construction and keeping traffic flowing on some of Sydney’s busiest streets was always going to be a huge task. For the most part, the community has been very understanding and supportive of the work, and the overall project vision.

In terms of construction, our biggest challenges have been below the road surface. Despite extensive investigation, more than 1,400 unknown utility services have been discovered during construction and each has had to be identified and treated along the way. This was in addition to the protection, upgrade and relocation of existing, aged assets including water and waste pipes, drainage, electricity and telecommunication services.

We always knew this would be a complex and challenging part of the job. However, we are now out of the ground in many areas, more than 13km of track is in place, and we are starting to construct the light rail stops.

What innovations will the network feature?

Sydney is the first city in the world to receive Alstom’s Citadis X05 vehicles, bringing the latest technology to the network. The vehicles will feature energy efficient permanent magnet motors, LED lights, sensor-based air-conditioning and will be able to capture and recover 99 per cent of energy used from braking. At the end of their life the vehicles are 98 per cent recyclable. Vehicles will run in coupled sets carrying up to 450 passengers.

In the CBD, the light rail will be powered by a third rail, eliminating the need for overhead wiring through the historic city centre, and improving amenity for the new pedestrian boulevard on George Street.

In Randwick, our underground substation will feature an innovative underground geothermic cooling system. This will allow us to reduce impacts on the public parkland, reduce noise, and make energy and carbon savings.

ALTRAC represents Alstom (Systems and Signals), Transdev (Operator) and Acciona (Contractor). How has it been representing three diverse companies together on this project?

Bringing together these companies, with a wealth of international experience and access to the latest light rail technology, has been very beneficial to the project. Each of the partners has previous experience working together on projects around the world, and it’s great to be able to transfer this knowledge and expertise to Australia.

We’re now coming into the first stages of testing and commissioning of our first light rail vehicles, and it’s great to see the project starting to transition from civil construction, led by Acciona, to systems and signalling, led by Alstom. In the meantime, Transdev is working alongside the teams and preparing for the operation and maintenance of the network.

The diversity in the teams means I can come to work and hear French, Spanish, English and Irish accents, to name a few, as we have employed many talented people from around the world to join our talented Australian people.

Part of the George Street pedestrian precinct recently opened; what has the feedback been like? Was it difficult to balance aesthetics and function during the design process? Will the feedback impact or promote changes in other sections still under construction?

The section of George Street between King and Park Streets was opened before Christmas and received a very positive public reaction. It was the first opportunity the community has had to see the vision for the light rail and Sydney’s new pedestrian boulevard through the CBD.

It’s great to see people taking full advantage of the new space, particularly those who enjoyed the Christmas festivities during the busy retail season.

Possibly one of the biggest compliments we received in the media was that the new space ‘actually looks like the artist impressions’. It has been really exciting to see the project design come to life so successfully after so much hard work from the team.

Following the delivery of the CBD and South East Light Rail, what’s next for ALTRAC?

What do you see as the drawbacks and benefits of the different track standards on Sydney’s Inner West and CBD light rail lines?

Firstly, the track standards are not different. The light rail vehicles for the CSELR will use the existing Inner West Light Rail line to run to and from the new maintenance depot at Lilyfield for major maintenance and repairs.

Operating the CBD and South East Light Rail as a linked but independent network means we can build the line with the most up to date advancements including third rail power technology and the new network will have a high capacity, without constraints from existing light rail infrastructure.

Customers will be able to easily interchange between the CSELR and IWLR at both the Chinatown/Capitol Theatre and Central Station stops.

Glenn Bentley, Chief Executive Officer, ALTRAC will be speaking about Sydney Light Rail at the Light Rail Conference 2018. This event is set to be the standout industry event of the coming year. Located in the heart of Sydney at the Sofitel Wentworth on 1 and 2 March, 2018. Find out more here: