Emma Gierschick OAM: “We Need Better Recognition of Trauma in Children With a Disability.”

Emma Gierschick has shown extraordinary tenacity in the face of adversity. As a survivor of family violence and breast cancer, plus a sole parent of a daughter with Down syndrome, Emma has navigated complex issues to get the right support for her daughter Amelia. 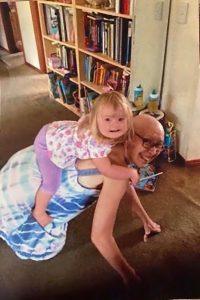 “It’s been very, very tough at times but my need to protect my daughter is significant,” says Emma.

Drawing on this lived experience, Emma has become a nationally recognised advocate and voice for children with disabilities who have or who are experiencing trauma.

Emma will be chairing a session at the National Disability Summit, 2-3 December 2021, on making the Australian health system more accessible for children with disabilities. While Emma says she has always had pretty positive experiences, she admits there are challenges and communication gaps in the health system.

“I have a hospital bag permanently packed which includes any food my daughter may need as she eats an incredibly restrictive diet, and any food provided by a hospital is unfortunately not on her list. This definitely increases stress for me. As a special needs mum, I always have plans B & C in place and ensure I have things with me to entertain and feed Amelia in the event we have a long wait. I’d like to see children with a disability given priority to reduce the waiting periods for scheduled appointments.”

Emma also always phones ahead to ensure any health practitioners are aware of Amelia’s disability and needs. “I won’t risk seeing practitioners who have no experience of disabilities or paediatrics. I do not suffer fools, especially if presented with someone who makes inappropriate comments. I have no hesitation in ending a consult if it may cause Amelia any distress.”

Understanding trauma in children with disabilities requires sensitivity. Amelia has PTSD from her early exposure to extreme family violence. Emma needs to advise medical staff from the get-go – as soon as an ambulance arrives, or they attend an emergency department or a health service who isn’t familiar with her.

“I make it clear that certain behaviour from medical professionals is required. Do NOT crowd Amelia or back her into a corner. Make sure there are no sudden movements; she needs to be approached calmly and slowly. No raised voices. Amelia will get very distressed and extremely anxious if she sees somebody upset, frightened or looking ill. It is also possible she will put on a show of giddiness, busyness or excitement. She is simply ‘playing out her illness’ and it is a sign of her hypervigilance and demonstrating extreme anxiety. However, it can come across as a happy excited child which can make it a challenge to convince professionals she is ill and likely to crash.” 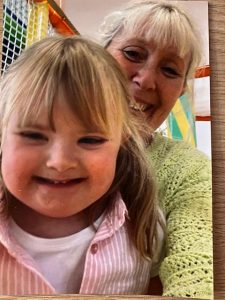 “Medical staff might also have to pretend to do whatever they are planning on her doll first and be very cognisant that she is also working hard on overcoming her previous fear of men.”

A Need for Trauma-Informed and Consistent Care

A negative experience occurred when Amelia was referred to a psychologist for a multi-level Autism Spectrum Disorder (ASD) assessment due to difficult behaviour. This was despite Emma pointing out her earlier trauma background, and that she believed Amelia’s behaviour was a response to external triggers. During one part of the assessment process Amelia became overwhelmed and distressed. She used all her typical self-regulating techniques including sucking her thumb, trying to reassure herself in a mirror and attempted to communicate and come over to Emma for reassurance, but the psychologist physically blocked Amelia’s access the mirror, and raised her voice instructing Emma she could not talk to her and had to ignore her. She then went on to physically block Amelia’s attempt to reach Emma. This triggered Amelia’s earlier exposure to family violence trauma. She clearly felt unsafe, and threatened, had heard her mother and safety net being shouted at and became extremely anxious. Emma terminated the assessment.

“I wrote a VERY firm letter regarding the lack of trauma-informed care within the assessment process, and described the significant fall out I was dealing with at home as a result of Amelia’s extreme anxiety, how she kept ruminating about the scary lady, was highly emotional and very clingy.”  The psychologist apologised and Amelia’s final report after all consultations were completed was that she did not have ASD, but had PTSD and her behaviour was a response to triggers from earlier trauma.

Emma says that the lack of therapeutic recovery support from trauma for children with a disability, and the potential misdiagnosis of children displaying anxiety due to trauma, remains a significant national issue. “It is a direct contravention of our commitment to the UN Conventions” she adds. She has also been irritated at times by the lack of consistency with professional care workers.

“Professional carers have been either excellent or completely useless to the point of being lazy, neglectful, dishonest or abusive, completely taking advantage of the fact that my daughter was previously nonverbal with an ID, and I was not around to supervise due to medical treatment. However, they have not factored in the ‘jedi powers’ a special needs parent develops, how in-tune they are to the slightest disturbance in their child’s behaviour, and their super sleuth detective skills to investigate what has occurred. Just because a child is nonverbal, it doesn’t mean they can’t communicate.”

Emma says that when it comes to solving these issues, giving parents a greater voice and control is fundamental.

“Parents are the experts on their child and State and Federal Governments need to engage parents and people with a disability and listen to the voices of lived experience when making policy decisions.”

Raising the Profile of Children with a Disability and PTSD

For several years, Emma was fighting simultaneous battles – to save her own life physically fighting breast cancer and battling to save Amelia’s life legally.

“I studied the Family Law and Family Violence Acts and the UN Conventions on the Rights of the Child and the Rights of Persons with a Disability, so I could personally represent Amelia in court. This was due to the lack of awareness, consideration and at times even interest in her vulnerabilities. It was terrifying. I had a lawyer tell me that the fact Amelia needed so many hospital appointments was a huge concern for him representing his client and was just a sign I was a bad mother.” She added “I would love to cross his path again now.” 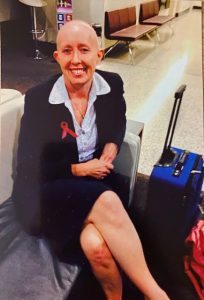 “At the same time as battling breast cancer, and fighting in court, I also embarked on a one-person campaign to raise the profile for children with a disability who face violence and abuse around Australia. I was balancing surgery, chemo and daily radiation with court battles, presentations, submissions and of course caring for my daughter who was only 3yrs old at the time.”

“I drew on my fear for her safety, my anger at the injustice and ignorance of the legal system, and my need to effect permanent judicial change, so that the law could protect her in the event I died trying. Standing up against lawyers using dubious tactics was essential.”

Emma ultimately won all legal matters, ensuring Amelia’s safety. She then successfully went on to get Amelia formally recognised as a primary Victim of Crime from her exposure to the violence and abuse. But it took six years and three attempts.

“The first attempt was dismissed as I was informed that as Amelia had Down syndrome it would be too hard to determine which behaviours were due to her disability and which were trauma related. I found this level of legal ignorance infuriating.”

Emma translated her fury into action, and persevered, ultimately creating a benchmark for the rights of children with disabilities who have experienced trauma or abuse to get recognised as victims of crime. She has been published in numerous reports or inquiries including the Human Rights – Children’s Rights Report, the Royal Commission into Family Violence and the Victorian Disability Plan. She is currently working on three submissions for the Royal Commission into the Abuse, Neglect and Exploitation of People with a Disability, and has just been accepted to submit a piece for a lawyers’ publication.

As a result of her tenacity, Emma has been recognised with numerous awards, most recently being awarded a Medal of the Order of Australia, OAM. 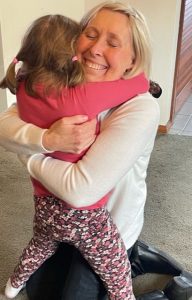 Emma has now been in remission from breast cancer for over five years and is in good health. She continues to actively work to raise awareness around the vulnerabilities of children with disabilities, particularly those who need recovery support from trauma.

Learn from Emma Gierschick OAM at the 12th Annual National Disability Summit, 2-3 December 2021 in Melbourne. The summit will bring the NDIS, Government and community care sectors together to focus on creating greater choice for all people and families living with disability.