ABA CEO Anna Bligh on ‘erosion of trust’ in banks

The Australian Bankers Association’s new CEO, Anna Bligh aims to rebuild trust between the banks and their customers. Her powerful statement “I think there is a direct correlation between the implosion of trust and explosion of scrutiny” is memorable and timely. She told the Australian Financial Review’s Banking & Wealth Summit on 5 April in Sydney “Banks here in Australia are under an unprecedented level of pressure and scrutiny”. The new CEO’s statements were welcomed by an industry wishing to embrace reform rather than deal with the threat and tasks related to a royal commission. 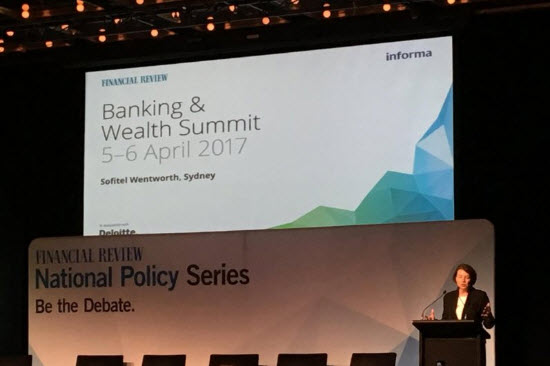 Our banking system is the “envy of the world” providing strength and stability, seeing us through the global financial crisis, but the newly appointed chief executive also stated, the respect of customers did not match that level of peer respect. An erosion of trust is evident and it will be her priority to address the issues with reform going forward and identifying which needs to be addressed first.

Ms Anna Bligh highlighted the work of Edelman with the ‘Trust Barometer’ and said the banking industry was not immune to the global erosion of trust that Edelman highlights in their research.

Ms Bligh said the traditional customer relationship with banks had changed. Technological change has opened opportunities for consumers but has also had the effect of dehumanising banking. Australian banks are balancing the interests of customers and shareholders whilst politicians and regulators are responding to this with unprecedented levels of scrutiny.

The government is expected to announce a second package of reforms to be handed down before the May federal budget in response to a call for a royal commission into Australia’s banks. This came in the form of new authority this week announced by the Financial Services Minister Kelly O’Dwyer, who has appointed Cathy Walter as the chair of a powerful new body set up to “professionalise” the scandal-ridden sector. The Financial Adviser Standards and Ethics Authority (FASEA), will start on July 1 to set mandatory educational and training requirements, develop and set a national industry exam and create a code of ethics for advisers. Dr Simon Longstaff AO, Executive Director of the Ethics Centre and a Director of the Banking and Finance Oath has also been appointed a Director of the new authority.

The Banking & Finance Oath’s inaugural conference on 8th June 2017, in Sydney, Banking & Finance Ethics will explore trust as the foundation of the banking profession. Many argue it is not a profession but this industry is fast recognising that professional standards and a code of ethics must exist to create a sustainable human system that can empower the industry to move ahead with confidence. Ethics and trust are at the heart of such systems. Francesca Boase Edelman’s Managing Director will address the conference on why ‘trust’ is foundational. Azish Filabi, CEO Ethical Systems, USA will speak on ‘culture’ and why the industry must create human ethical systems to survive unprecedented scrutiny. The programme will look closely at the issues the industry is facing and will face with the greater use of technology that will further challenge its values. It is timely to look more closely at foundations, culture and trust.